Everyone knows that global innovation is increasing at a blistering pace, right? Well, maybe it’s not, suggests Jonathan Huebner, author of the paper “A Possible Declining Trend for Worldwide Innovation.” He argues that, contrary to conventional wisdom, global innovation is actually on the skids. If he’s right, this may change the way many employers view and manage innovation in their organizations.

Huebner (2005a) contends that the rate at which human beings innovate – when measured in terms of important technological innovations per year per person – has been on the decline since the late 19th century or early 20th century, depending on which data set is used. Huebner bases his conclusion on two different analyses. First, he examined 7,198 important technology developments that occurred between the end of the Dark Ages and the present day, as listed in The History of Science and Technology. Using that data set, he found that the rate of innovation peaked in 1873. Second, he looked at the number of U.S. patents granted per U.S. resident over time. Using that data, he found that the rate of innovation peaked in 1916.

By following the curve of faltering innovation, Huebner extrapolates out to the year 2024, when, according to projections, the rate of global innovation per person will be no higher than it was during a period in the Dark Ages (which Huebner defines as ending in the mid-1400s). In other words, he thinks the modern world may soon hit a 600-year low in terms of its inventiveness.

Such a claim is likely to strike some as preposterous. After all, the world often seems flooded with new gadgets, ideas and services. But this impression might have more to do with sheer population than the rate of innovation. There were only about 425 million people in the whole world in 1500, compared with over 6.5 billion today (“World,” 2006). Even if innovation grew at equal per-capita rates during both eras, ours would still be 14 times more innovative based on population alone.

But some experts are unwilling to concede that innovation is actually slowing. Futurist Joseph Coates (2005) takes issue with Huebner’s analysis, especially with his technique of linking the number of innovations with world population numbers. Coates writes that “with the explosive growth of populations in India, China, Sub-Sahara Africa, Latin America and Southeast Asia, which had little or no modern history of extensive creativity in science or technology, the denominator in [Huebner’s] valuations is simply inappropriate.” Theodore Modis (2005), founder of the strategic forecasting company Growth Dynamics, voices a similar reservation and predicts that the growing populations of developing nations will eventually become much larger producers of innovation.

Nonetheless, so far Huebner (2005b) seems to have defended his analysis well, sometimes even using data sets offered by his opponents to bolster his argument. If he is even partly correct, the question becomes, what would be causing the downturn in innovation? After all, people should be more inventive than ever thanks to today’s better-educated populations, the large sums being spent on research and development, and the increasingly powerful information tools that are widely available to researchers.

Huebner offers two possible explanations. First, the world may be approaching an economic limit to innovation, where each new major innovation becomes more and more expensive to develop. Second, we could be reaching a limit to the human brain. Human beings, he posits, are being “bombarded with far more information than they can process,” making innovation more difficult.

Prof. Benjamin Jones (2005) of the Kellogg School of Management offers a slightly different explanatory model that nonetheless supports the contention that we may be reaching the limits of the human brain. He points to what he calls “a rising burden of knowledge” that potential inventors must bear before they can create something new (Hayden, 2005). That is, humanity’s store of knowledge has already grown to such an extent that people must often spend years learning it before they can develop major new ideas themselves. Jones’s research suggests that in order to innovate today, inventors have to learn more first, specialize in more limited areas of knowledge and rely more heavily on teamwork. But these strategies for boosting innovation can be carried only so far. Jones suggests that if the burden of knowledge is truly rising, then this may be bad news for the long-term prospects of innovation growth.

Assuming Huebner and Jones are right, it’s likely that innovating has already become – and will increasingly be – an uphill battle. This has various implications for managers. First, major innovations could become an increasingly scarce resource in the future, raising the potential market value of each major step forward. As the value rises, so will the pressure to either innovate or find some other major competitive advantage in the marketplace.

Second, companies that wish to innovate will have to manage their knowledge workers exceptionally well. They will need to recruit highly knowledgeable and up-to-date researchers and engineers, people who have had time to assimilate the expertise in their fields. Then they will need to train these people to collaborate as well and efficiently as possible in order to maximize their group ability to innovate. Employers might also have to find ways of helping would-be inventors filter or otherwise assimilate information.

Why Innovation In Business Is Crucial 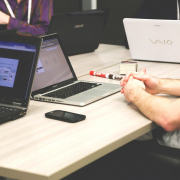 Outsourcing: An Innovation for Business

3 Characteristics of Innovation
Want to Blow Your Payday Loans? Then Invest in Chindōgu! Be A Successful Work From Home Entrepreneur
Scroll to top